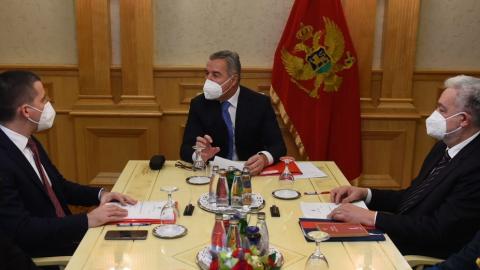 But analysts see a bid by Djukanovic to consolidate his party ranks before a crucial congress on January 23 and rally his base before a first electoral test in Montenegro's second city, Niksic, in March.

"Political obstruction is one of the political tactics that has obviously become the main policy of the DPS in the post-election period," political analyst Boris Maric, head of the Centre for Civic Freedoms, an NGO.

"Djukanovic is primarily acting as president of the so-called patriotic bloc," he said and trying to shore up the DPS.

The DPS left power in December after three decades of uninterrupted rule, replaced by a governing alliance of three political blocs that hold the narrowest of majorities in parliament.

On October 7, some five weeks after an electoral earthquake that signalled the end for the DPS, Djukanovic said during an official visit to Germany that Montenegro was entering a period of political cohabitation and pledged cooperation with the new government.

But with the government less than a month old, the president on January 2 rejected a set of laws adopted by parliament at the end of 2020, including amendments to a controversial Freedom of Religion law adopted under the DPS and which had triggered months of street protests.

Two days later, Djukanovic refused to sign off on the recall of seven ambassadors close to his party, saying the ministry of foreign affairs had failed to provide him with an explanation for the...