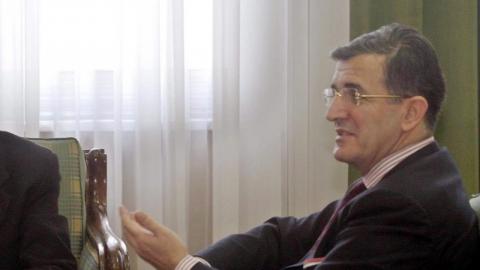 Serbia's Justice Ministry told BIRN it has no obligation to reveal information about the requested extradition of former Montenegrin official Svetozar Marovic, or about its activities on this matter.

BIRN had asked the ministry for information on how many times Montenegro had requested Marovic's extradition and what activities it had conducted relating to that matter. BIRN sought similar information on Marovic's son, Milos.

In December 2020, BIRN also asked the ministry about Marovic's extradition and whether Serbia would extradite him to Montenegro but did not get an answer.

The new government in Montenegro has renewed a request to extradite Svetozar Marovic, ex-president of the former State Union of Serbia and Montenegro, who fled the country to avoid prison - after a BIRN investigation revealed the family's business activities in Serbia.

An investigation by BIRN showed that Marovic's 37-year-old son, Milos, has since developed business interests in Serbia, having pleaded guilty to involvement in Montenegro to an illegal land sale in a village near Budva that prosecutors said cost municipality 1.4 million euros. In 2016, he was sentenced to one year in prison and ordered to repay 380,000 euros.

Both father and son have since fled, however, and have reportedly lived untouched in neighbouring Serbia.

Marovic was president of the former State Union of Serbia and Montenegro, which lasted from 2003 to...