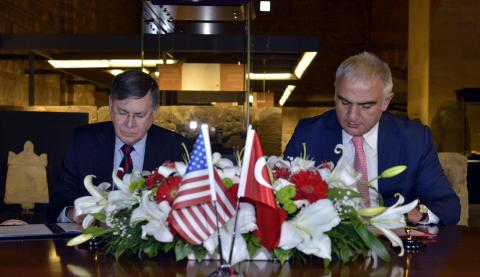 Turkey and the United States have signed a memorandum of understanding (MOU) for the protection of cultural heritage and the prevention of smuggling of archaeological and ethnological artifacts belonging to Turkey.

"Legal struggles that last for years with enormous costs will be concluded in a very short time and with low costs. This is the biggest deterrent we have," Turkish Culture and Tourism Minister Mehmet Nuri Ersoy said.

The agreement was signed on July 19, 2020, at the Anatolian Civilizations Museum in Ankara with the participation of the U.S. Ambassador to Ankara, David Satterfield.

Following the agreements to which Turkey is a party, it was a step in a triple strategy, which includes preventive measures to combat trafficking of cultural property, international assistance and return of artifacts, Ersoy said, speaking at the signing ceremony.

While establishing a very valuable cooperation between the two countries, the agreement was a preventive measure in terms of its legal regulations, and a major step that laid the groundwork for the return of artifacts, Ersoy stated.

Stating that due to its unrivaled heritage of civilization, Turkey is the country that gives the most intense fight against illegal activities related to cultural heritage, Ersoy said, "As soon as the memorandum of understanding is brought into force, the artifacts smuggled from our country to the United States will be confiscated and returned to Turkey.

"This important document, which will also constitute a legal basis for operations of the U.S. law enforcement units, will bring active results," Ersoy said, adding that legal struggles that take years to resolve and cost a lot of money would be resolved in a short period with low costs and that...