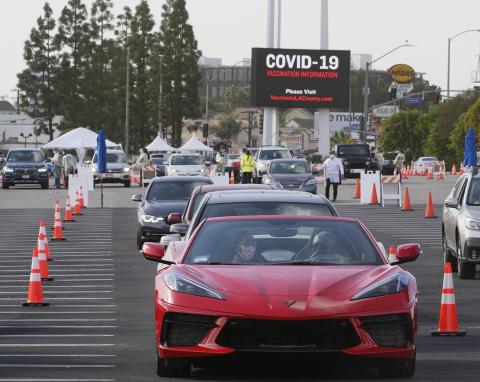 Almost a year after the United States registered its first COVID-19 death, the pace of the pandemic has picked up with 100,000 deaths in the past month alone, adding to a national toll far above any other country.

"It's hard sometimes to remember, but that's how we heal. It's important to do that as a nation," Biden said in somber remarks in Washington at the National Mall reflecting pool, where lights were turned on as a memorial to those who have died.

"Let us shine the lights in the darkness along the sacred pool of reflection and remember all who we lost," said Biden.

The arrival of mass vaccination campaigns in the United States and Europe had brought hope that the end of the epidemic was in sight, and the European Union said on Jan. 19 it was aiming to inoculate 70 percent of its adult population before the end of August.

EU chief Ursula von der Leyen said meeting the target could be "a turning point" in the fight against the virus.

But many EU countries - and other nations including India and Russia - have struggled to get their inoculation programmes off the ground.

As nations grapple with the health crisis, several inquiries have re-energized questions over the origins of the virus in China in late 2019, and how the authorities handled it.

Beijing has been accused of stifling whistleblowers who tried to raise the alarm, and experts said this week that officials could have reacted quicker to avert catastrophe.