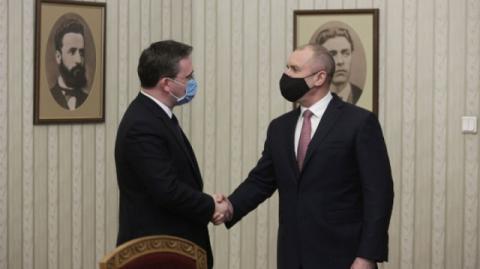 Bulgaria and Serbia need to encourage mutual investment and economic partnership in areas with high added value such as information technologies. It is time for the economic exchange to have priority over trade and to work towards creation of joint ventures and exports to third markets.This was stated by President Rumen Radev, who, together with Vice President Iliana Yotova, held a meeting with Minister of Foreign Affairs of the Republic of Serbia Nikola Selakovic who is in Bulgaria on official visit.

Bulgaria's Head of State and Vice President defined the first after 2014 visit of Serbia's Foreign Minister as a proof that the new government of Serbia sets the development of good neighborly relations and cooperation between Bulgaria and Serbia as its high priority. The visit is also a sign of commitment to accelerate the work on the construction of transport and energy infrastructure which connects the two countries and creates more favorable opportunities for business.

Nikola Selakovic underscored that mutual economic cooperation has been developing well, and the good results are based mainly on the trade. "In 2019 our trade turnover exceeded EUR 1 billion, but in the last year, marked by coronavirus, the trade turnover slumped to EUR 870 million in the first 10 months. We have to step it up," Serbian Foreign Minister said.

President Radev and Nikola Selakovic shared the opinion that opening of more border checkpoints between Bulgaria and Serbia would contribute to further development of economic, social and cultural relations between the two countries and would give a strong impetus for tourism.

Rumen Radev affirmed Bulgaria's support for the European integration of Serbia while Selakovic stressed that his country has no other...

Kosovo Election Dispute is No Excuse for Anti-Roma Racism