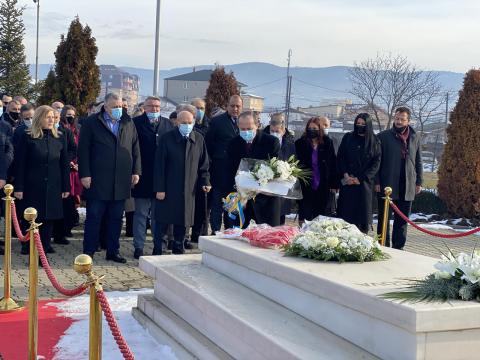 Acting President Vjosa Osmani paid tribute at Ibrahim Rugova's memorial in Pristina, saying that the path that he paved "remains a permanent guideline" for Kosovo.

Dubbed the pacifist father of Kosovo's independence, Rugova lost his battle with lung cancer in January 2006 when he was serving his second term as president. At that point, he was taking part in UN-led negotiations with Serbia about Koosvo's future status, which led to its declaration of independence in February 2008.

"He was a person who brought [Kosovo] Albanians together around the idea of freedom and independence and knew how to create strong friendship bridges with states which still back us," Osmani said.

"We commemorate his political determination and his institutional commitment as well as his human calmness and patience," Kurti said.

Rugova led the Democratic League of Kosovo, LDK party from its establishment in 1989 until his death, and his successor, Isa Mustafa, spoke at the memorial about his political legacy.

"I am here today to express the LDK's position and commitment to following the path President Rugova paved, and to say that nobody could inherit this path except the LDK," Mustafa said.

Rugova was born in December 2, 1944 in the village of Cerrce, in the western municipality of Istog/Istok.

In 1976-77, he studied under the supervision of Roland Barthes in Paris, where he developed his scholarly interests in literature with a focus on literary theory.

He established the LDK in 1989 as a broad movement which led Kosovo's 'parallel' institutions in the 1990s, after Serbian...