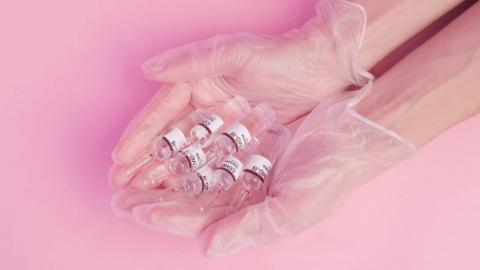 Meanwhile, Britain, the first country from the Western hemisphere to start immunisation, has already vaccinated 4.5 million people, according to One World In Data.

Germany and Italy have vaccinated 1.1 million people each, while North Macedonia's EU neighbours, Greece and Bulgaria, have vaccinated 85,000 and 18,000 people respectively.

Trusting in the COVAX mechanism

North Macedonia's authorities acted naively at first, clearly trusting that the country would get the shots it needed through the COVAX mechanism for fair access to the vaccine - and the EU's solidary fund.

They were caught off guard when even their neighbours, earlier than expected, before New Year, bought vaccines directly from the manufacturers and immediately launched immunisation.

Footage of Serbian President Aleksandar Vucic waiting for the first vaccine shipments at Belgrade airport made many Macedonians unhappy, prompting the authorities to try to neutralise this distress by making arrangements for 800,000 doses of the vaccine from the manufacturer Pfizer.

The Health Ministry, however, has a different perspective on things. It told BIRN that the country had no opportunity at the start of the arrival of the vaccines to directly negotiate with producers, as only EU member states were able to do so.

"The Health Ministry launched direct talks with the producer as soon as that option became available," the ministry insisted.

But this autumn, during his many public appearances, Health Minister Venko Filipce did not even mention buying vaccines directly. Meanwhile, Serbia,...