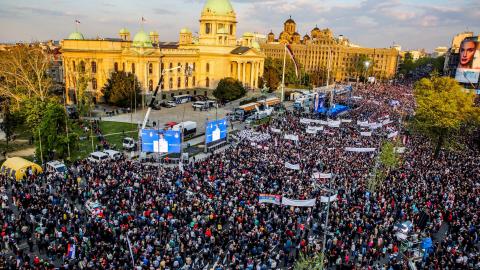 In 2021, Serbia's ruling Progressive Party faces being revisited by the errors of 2020.

A landslide election win in June yielded a parliament without an opposition, likely necessitating mediation by the European Union in 2021 if President Aleksandar Vucic is to head off another opposition boycott come the next election he wants held in 2022.

On the thorny issue of Kosovo, the majority-Albanian former southern province of Serbia, the prospect of an election in Serbia next year will make progress in EU-led talks between Belgrade and Pristina unlikely, prolonging the stalemate of 2020.

Add to that the government's haphazard handling of the COVID-19 pandemic, signs of disquiet over jobs and pay and the lack of any tangible progress towards EU accession, Vucic's Progressive Party, SNS, may be walking into a minefield in 2021.

"The government made three major errors in 2020 that will come back to haunt it in 2021," said Belgrade political scientist Vujo Ilic. "It overspent in the first wave of the pandemic, it made a strong turn away from the EU and it overplayed its hand in the elections."

Ivan Sekulovic, an expert on social issues at the Foundation Centre for Democracy, told BIRN the SNS was running out of resources:

"The ruling regime took most of the resources and there is little left for the jeopardised social groups outside of the SNS's clientelist net. Due to the pandemic and the state's lack of an adequate social program, many will be in trouble."

The Progressive Party's thumping win in the 2020 election masked a deepening divide in Serbia, made all the more dangerous by the absence of a single opposition...