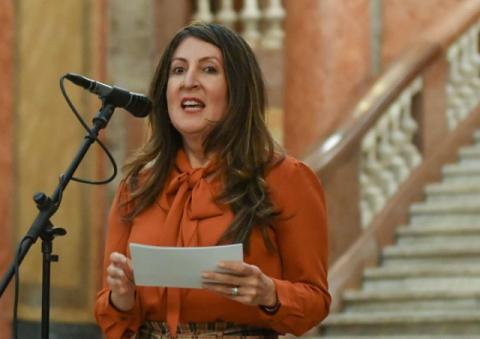 "I've worked with Joe Biden before, and I know he's a unifier. In his inaugural speech he touched upon the important themes - love, hope, optimism - that's exactly what America exemplifies," said U.S. Ambassador to Bulgaria H.E. Herro Mustafa in an interview with the Bulgarian National Radio after President Joe Biden assumed office officially.

Herro Mustafa expressed confidence that under the new US administration, transatlantic relations with the European Union will become even stronger.

In her words, the peaceful transition of power and the restoration of the values of government through fair elections, freedom of speech and assembly are at the core of the American democracy.

"The inauguration of a new president is a beautiful, symbolic event that fills me with great pride and reverence for all that America embodies," the United States Ambassador to Bulgaria noted.

"We have held inauguration ceremonies every four years since 1789. These democracy-bound institutions and traditions are important, and yesterday's ceremony really thrilled me, as any inauguration. This is a renewal of America's commitment to the ideals of democracy," said H.E.Herro Mustafa.

"Yesterday we witnessed a peaceful transition of power. Former President Trump wished Biden's new administration great luck and success and also said that the future of our country has never been better. Our democracy has been tested in the past, but it has always come out stronger after these trials," the Ambassador said.

As an example, Herro Mustafa quoted the right of incumbent President Trump's to bring fraud allegations even before the Supreme Court during November election.

In response to a question about the main challenge for President Joe Biden, who is...

March 4: World Obesity Day: Well Over Half Bulgarians Are Overweight

Infectious Disease Specialist: At Least 2,5 M Bulgarians Have Had Covid-19