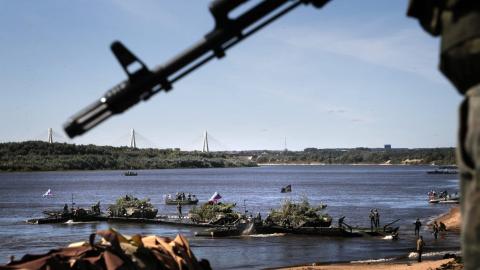 In most of her addresses to the international public since she took office in December, Sandu has also insisted on the withdrawal of Russian troops and removal of Russian weapons from Moldovan territory.

The new President has called for the replacement of the existing military peacekeeping mission with a civilian observer mission under the auspices of the OSCE.

She argued that there is no danger now of a new armed conflict erupting on the banks of the Dniester River that separate Moldova from the breakaway region.

BIRN has checked what needs to be done in both Russia and Moldova, but also in terms of the international presence, to get Russian troops to leave Transnistria.

Saga that dates back to the early-1990s

As the Soviet Union dissolved, and the former Soviet republic of Moldova proclaimed its independence, fighting erupted between those who championed or feared independence.

After five months of fighting between pro-Russian rebels backed by the ex-14th Soviet army and the Moldovan army, the Russian and Moldovan presidents, Boris Yeltsin and Mircea Snegur, signed a peace treaty on July 29, 1992.

This resulted in a peacekeeping mission patrolling the left bank of the Dniester River, composed of Russian and Moldovan military contingents, representatives of the administration of the Transnistrian region and Ukrainian military observers.

Today, Moscow maintains a peacekeeping mission in Transnistria of around 500 soldiers and the Operative Group of Russian Troops, OGRT, of 1,000 to...