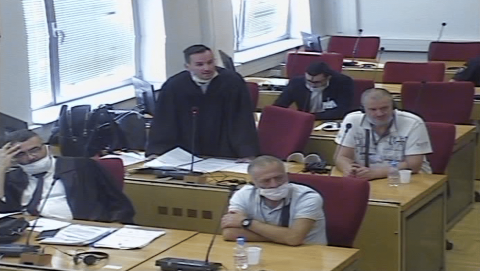 Defence lawyer Senad Dupovac told the Bosnian state court in his closing statement on Friday that numerous witnesses at the trial of Senad Dzananovic and Edin Gadzo had given contradictory statements, and called for an acquittal.

The prosecution alleges that Dzananovic and his co-defendant Gadzo unlawfully detained, tortured, mistreated and killed civilian detainees in the Alipasino Polje B Faza neighbourhood of Sarajevo during the wartime siege of the city.

The two men, wartime members of the 'Stela' unit of the Territorial Defence force and of Bosnian Army special units, were accused in the original indictment of participating in a joint criminal enterprise along with their superiors, Jusuf 'Juka' Prazina and Samir 'Krusko' Kahvedzic.

Dzananovic's defence lawyer Dupovac said that at the beginning of the siege of Sarajevo, the Alipasino Polje neighbourhood was shelled every day, so Prazina organised and led the main armed resistance, and later proclaimed himself a general and secured a position with the Bosniak-led Bosnian Army.

He also said that Prazina had his own headquarters manned with his acquaintances.

A number of witnesses said during the trial that a list of Serbs in the area who possessed illegal weapons at the time was found.

"Unfortunately, during that period, Bosnian Army members carried out some illegal activities, so some of them, including Senad Dzananovic, were prosecuted at the District Court Martial in Sarajevo," Dupovac said.

He said that Dzananovic was sentenced to three years and four months in prison at the time for committing murder and causing insecurity in general.

But he argued that there were no documents and evidence that proved that Dzananovic was appointed as the manager of all...