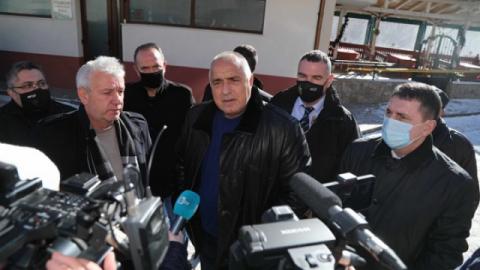 The reports of my European colleagues raise great concern - a huge number of infected, huge number of deaths, overburdened healthcare system, huge external debts and a slump in the GDP of the leading EU Member States, which is why after the health crisis is over there will inevitably be a very severe financial and economic crisis, Prime Minister Boyko Borissov said after the end of the European Council online meeting in which he participated.

"Unfortunately, the virus mutates and there is no general guiding rule which we could follow to prevent its spread," Borissov said, adding that Member States are acting according to the situation. With regard to Bulgaria, the Prime Minister expressed confidence that the current approach to handling the crisis, i.e. mobilization of society, with distancing and other preventive measures, is correct, pointing out that in Bulgaria the measures are exceptionally liberal against the backdrop of the other countries.

The Prime Minister also emphasized another issue that was addressed at the EU Council meeting - the delay in vaccination in some of the Member States. Prime Minister Borissov was adamant that the vaccination plan in Bulgaria is implemented in the most reasonable, balanced and correct way, including guarantees that all citizens who received the first dose of the vaccine will receive the second one.

By March 2021, EU Member States must set vaccination goals for the inoculation of at least 80% of healthcare professionals and social workers, as well as 70% of the adult population over 80 by the end of summer. This will be what EU countries will strive for, announced Prime Minister Boyko Borissov.

"The European Medicines Agency is working towards increasing production capacity with vaccine...