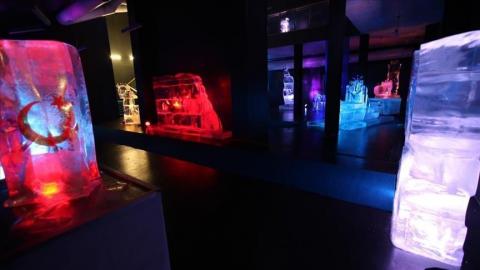 The Ata Ice Museum in the eastern province of Erzurum, one of the most important centers of winter tourism, is now welcoming visitors with new works of art.

The museum, the only one of its kind in Turkey, was established in cooperation with Atatürk University and the Northeast Anatolian Development Agency (KUDAKA). It opened last year at the Faculty of Fine Arts at Atatürk University in Erzurum, one of the provinces to witness the harshest winters in the country every year.

A total of 22 works made of ice including an igloo, a map of Turkey, a Turkish flag and a statue of Nene Hatun, an important symbol of the city, are being shown at the exhibition with the theme "Republic and Child" and "Salt and Ice."

The museum, which contains ice sculptures illuminated by special lighting systems, takes visitors on a journey through the poles wearing coats due to the cold temperature inside.

Mustafa Bulat, the dean of the Fine Arts Faculty of Atatürk University, told state-run Anadolu Agency that the museum was opened on July 15 last year with the support of Ömer Çomaklı, the university's rector. Bulat said it took three months to prepare the exhibition.

"Many works such as the igloo house, the symbol of the tent tradition of the poles and Central Asia, statues such as the Huma bird for children, the seahorse and small sailboat, the map of Turkey and the Turkish flag and Nene Hatun, one of the symbols of Erzurum, were heated with iron and then combined together," he said.

He said they aim to contribute to the city's tourism by introducing the culture of the region and are waiting for visitors to come to the museum.