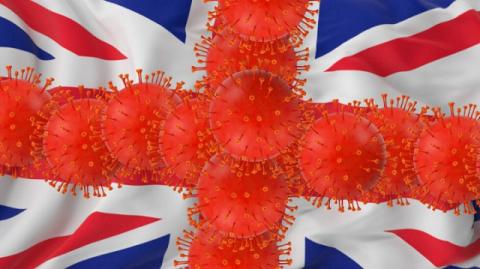 The full closure of the UK's borders has been "considered" by the government amid concerns about new COVID variants being imported from abroad, a minister has revealed.

This week, the government closed all UK travel corridors - which had allowed arrivals from some countries to avoid having to quarantine - until at least 15 February.

People coming to the UK from abroad also now have to show proof of a negative COVID test from up to 72 hours before their journey.

But Prime Minister Boris Johnson is reportedly under pressure from some members of his cabinet to go further and close Britain's borders completely to foreigners.

Environment Secretary George Eustice told Sky News that "everything is always kept under review" when asked if a full border shutdown could be introduced.

"We always keep things under review and it's been considered," he said.

"There is concern at the moment at number of mutant strains that there are - different strains of this coronavirus are cropping up in other countries.

"There are concerns that there is a risk that one day there will be a strain that might be able to evade the vaccine.

That's why last week the prime minister toughened up the current restrictions.

"We require a test before people travel and then they must quarantine while they're here.

"There are now no exemptions from that policy, so we've already toughened it up - we think that's the right approach for now but, obviously, everything is always kept under review."

The prime minister was this week accused of having "overruled" Home Secretary Priti Patel at the start of the pandemic last March by keeping the UK's borders open to foreign travellers.

According to The Daily Telegraph, some senior...