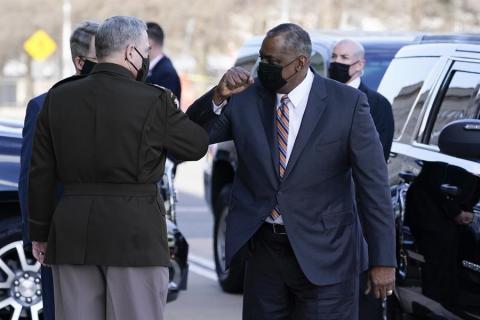 Lloyd J. Austin, a West Point graduate who rose to the Army's elite ranks and marched through racial barriers in a 41-year career, won Senate confirmation on Jan. 22 to become the nation's first Black secretary of defense.

The 93-2 vote gave President Joe Biden his second Cabinet member; Avril Haines was confirmed on Wednesday as the first woman to serve as director of national intelligence. Biden is expected to win approval for others on his national security team in coming days, including Antony Blinken as secretary of state.

Biden is looking for Austin to restore stability atop the Pentagon, which went through two Senate-confirmed secretaries of defense and four who held the post on an interim basis during the Trump administration. The only senators who voted against Austin were Republicans Mike Lee of Utah and Josh Hawley of Missouri.
Before heading to the Pentagon, Austin wrote on Twitter that he is especially proud to be the first Black secretary of defense. "Let's get to work," he wrote.

And a short time later he arrived at the Pentagon's River Entrance, where he was greeted by holdover Deputy Defense Secretary David Norquist, who has been the acting secretary since Wednesday, and Army Gen. Mark Milley, chairman of the Joint Chiefs of Staff. He didn't stop to answer reporters' questions but said he looks forward to dealing with the press.

The Pentagon said that after being sworn in and getting an intelligence briefing, Austin would hold a meeting on COVID-19 with senior civilian and military officials. He also planned to speak by phone with NATO Secretary General Jens Stoltenberg and to receive briefings about China and the Middle East.
Austin's confirmation was complicated by his status as a recently retired general....

Fighting fears of vaccines high up in Turkey’s mountains

AstraZeneca to deliver under 90 mln doses in Q2