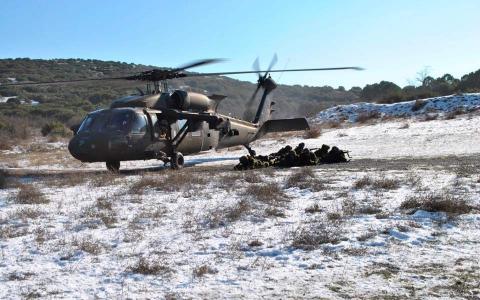 Troops from the Hellenic Army's 596th Airmobile Battalion and American counterparts from the US 5th Battalion, 101st Aviation Regiment are seen conducting air movement and air assault training as part of the Pegasus 21 exercise, in a photo made available over the weekend. The seven-day exercise, which took place from January 15 to 20, involved three American UH-60 Black Hawks, two American HH-60 Black Hawks, Greek UH-1 Hueys and Greek AH-64D Apaches. The exercise was aimed at strengthening the interoperability of Greek and US forces. It was held in the area of Nea Santa, in the region of Kilkis, in northern Greece. [ANA-MPA]

Inside the Athens Masonic Lodge! (14+1 photos)
Muslims demand the building of a Mosque in Thessaloniki
CNN Turk reports a Greek radar system will have ‘eyes’ 15km inside Turkish territory
Olympiacos to meet Arsenal in the final 16 of the Europa League

EU Leaders Agree on Introduction of Vaccine Passports by Summer 2021
Bookings from UK to Greece skyrocket in one day: Skyscanner