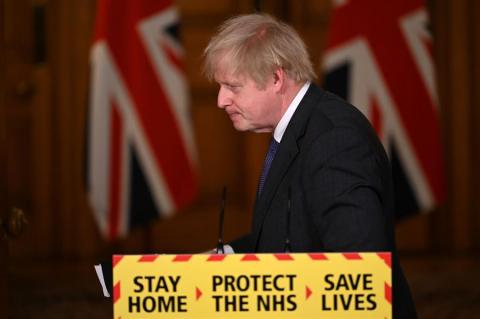 The coronavirus strain that has swept Britain and beyond in recent months could be more deadly as well as more transmissible, Prime Minister Boris Johnson said on Jan. 22.

The sobering news came as the U.K. sees record deaths from Covid-19, following a surge in cases and hospitalizations since the variant was first identified in southeast England in September.

The strain has also spread to more than 60 nations - including China, where the pandemic began more than a year ago - according to the World Health Organization (WHO).

"In addition to spreading more quickly, it also now appears that there is some evidence that the new variant... may be associated with a higher degree of mortality," Johnson said at a news conference.

He blamed the variant for the grim situation engulfing Britain, where another 1,401 fatalities were announced Friday, taking the overall toll to 95,981 - the highest in Europe.

Virus deaths have risen 16 percent over the past week, while the number of people hospitalized with Covid-19 is approaching double the number seen during the worst days of the first wave of the pandemic in April.

Chief government scientist Patrick Vallance said the new variant could be 30-40 percent more deadly for some age groups, although he stressed the assessment relied on sparse data.

"There's a lot of uncertainty around these numbers and we need more work to get a precise handle on it, but it obviously is of concern," he said, flanking Johnson in Downing Street.

"You will see that across the different age groups as well, a similar sort of relative increase in the risk."

However Mike Ryan, executive director of the WHO's health emergencies program, said it had not yet seen evidence that the variant is...