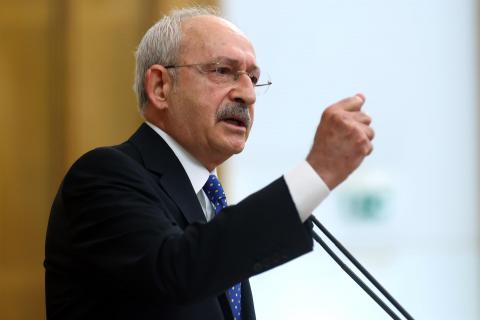 "The time has come to ask this. We are mercilessly criticized and slandered. I want to ask all our citizens who are voting for the AKP that what did the AKP want to do and the CHP prevented?" Kılıçdaroğlu said in his address to his parliamentary group on Jan. 26.

"Why are we being slammed in the most merciless and insulting way?" he asked.

Kılıçdaroğlu's words followed a very harsh statement by Erdoğan against the CHP on Jan. 25.

"You should find a good justification," he said.

The people voted in favor of the AKP to build a peaceful country and fix the economy, Kılıçdaroğlu stated.

"You are running the country for 19 years, and the CHP has been your sole target in these 19 years," he said.

The wrongful economic policies pursued by Erdoğan have caused only more people to go below the poverty line, Kılıçdaroğlu said, slamming the government for failing to address the acute problems of Turkey, namely the economic issues and the fight against the pandemic.

"They imported vaccine from China. In the past, Turkey had produced its own vaccine," he said, criticizing the AKP government for closing essential public health institutions tasked to develop and produce vaccines.

Former EU Commission leader: Greece has nothing to fear in terms of security