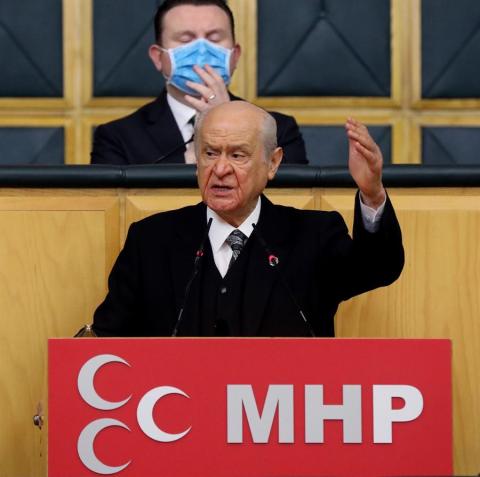 The Nationalist Movement Party (MHP) has once again renewed its calls for the closure of the Peoples' Democratic Party (HDP), with MHP leader Devlet Bahçeli saying his party does not favor the closure of political parties, but parties involved in "acts of violence" should be punished.

The MHP is the representative of a political approach that sees Turkey's interests above all ideas, Bahçeli said on Jan. 26, addressing his party members in parliament.

"We have always expressed that party leaders and its members who act against the basic principles of the constitution, should be held responsible and punished instead of penalizing political parties. The ideas and sensitivities underlying this approach are embellished and crystallized with the spirit of the culture of democracy," he said.

In the event that political parties are closed, their voters, party leaders and their grassroots that do not have any responsibility in this regard will also be punished, Bahçeli said.

But the closure of the HDP would not contradict this understanding, Bahçeli stated, claiming the party is involved in acts of violence.

"It is an indispensable requirement of the rule of law to exclude political parties that use violence and terror as a political tool and advocate violence and activities based on violence in order to overthrow the constitutional order," Bahçeli said.

"Taking into account the weight of the acts committed and their consequences, the closure of the HDP will not contradict justice, equity and national will," the MHP leader added.

When the indictment prepared by the Ankara Chief Public Prosecutor's Office regarding the Oct. 6-8 incidents is analyzed and examined, "concrete evidence and documents...