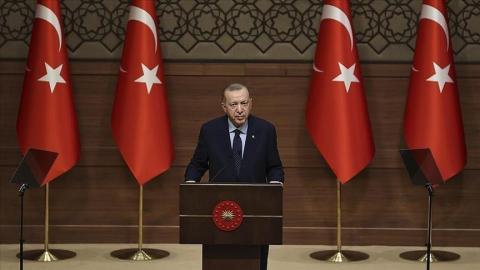 Turkey has witnessed neither health crises nor social breakdowns during the pandemic period, while the government ensured the "survival" of the country with social protection shield payments that exceed 46 billion Turkish Lira ($5.2 billion), President Recep Tayyip Erdoğan said on Jan. 26.

"We managed to leave behind a process in which heartbreaking scenes were seen even from the most prosperous countries of the world that have the least amount of trouble," Erdoğan said at a ceremony granting state jobs to the relatives of war veterans.

"On the contrary, we ensured the survival of our country with our social protection shield payments exceeding 46 billion liras and with the support we provided in a wide area," he said.

Although there is currently a "shortage of vaccines in the most developed countries of the world," Turkey was able to make a deal for 50 million doses of vaccine against COVID-19 in the first stage of its nationwide vaccination campaign, Erdoğan said.

"We have started the vaccination in a timely manner," he added.

Turkey not only saw the "strength" of its health infrastructure and general health insurance but also tested the coverage of its social support system, he noted.

This year's budget exceeds 81 billion liras for social support expenditures, Erdoğan said, while promising to continue to stand by the citizens whenever they need it.

After the ceremony, the government will appoint new duties for 193 young people trained under state protection, along with 2,140 disabled people and 370 relatives of martyrs and veterans, Erdoğan said.

"I saw the welfare state as a manifestation of Turkey stated in our constitution. I congratulate those who contributed to this purpose," Erdoğan said, wishing...