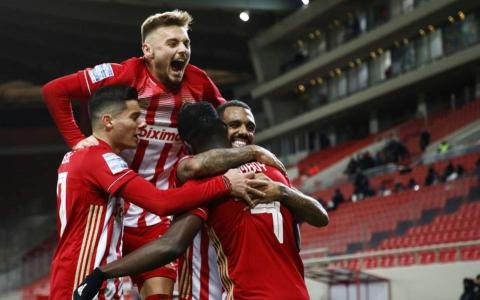 Olympiakos is running away with the title in the Super League after thumping 2019 champion PAOK 3-0 on Wednesday, while AEK suffered a shock at home to PAS Giannina.

The midweek fixtures for the 19th round of games all but confirmed that Olympiakos will go into the playoffs at the top of the table, as it has opened a 12-point gap from the second place, where Aris has now returned. The regular season has seven more rounds.

The Reds triumphed over their Thessaloniki visitors at the Georgios Karaiskakis Stadium via three second-half goals by Youssef El-Arabi, Mady Camara and Marios Vrousai. They have now climbed to 51 points while PAOK remained on 36, in fourth.

AEK stayed on 37, after going down 2-0 in Athens to PAS Giannina after strikes by Sandi Krizman and Jean-Baptiste Leo.

Aris took advantage of all this to rise to second through a modest 1-0 home win...