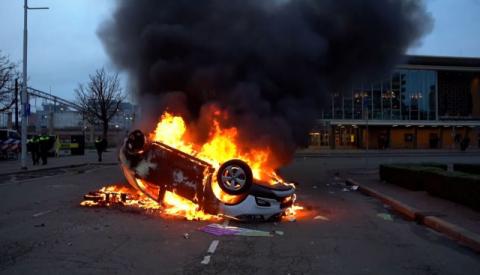 In several cities, including the capital Amsterdam, some businesses closed early and emergency ordinances were in place to give law enforcement greater powers to respond to the rioting, which was prompted by a nighttime curfew to curb the spread of the coronavirus.

On Tuesday when the 9 p.m. curfew went into effect, rowdy crowds of youths gathered in Amsterdam and Hilversum, but were broken up without incident. In Rotterdam, 17 people were detained for violating social distancing regulations.

That was in stark contrast to Monday night, when rioting rocked cities across the country and more than 180 people were arrested for burning vehicles, stone throwing and widespread looting.

But he cautioned that one night of quiet did not mean they could let down their guard. "We have to remain alert," Woelders said.

The Netherlands' first curfew since World War Two was imposed on Saturday despite weeks of falling infections, after the National Institute for Health (RIVM) said a faster-spreading variant first found in England was causing a third of cases.

A hospital in Rotterdam had warned visitors of patients to stay away, after rioters tried to attack hospitals in various cities.

A nationwide appeal issued by law enforcement on Tuesday evening called on parents to keep teenagers indoors, warning they could end up with a criminal record and forced to pay for damage to cars, shops or property.

In Amsterdam on Monday, groups of youths threw fireworks, broke store windows and attacked a police truck, but were broken up by a massive police presence.

Ten police officers were injured in Rotterdam, where 60 rioters were detained overnight...