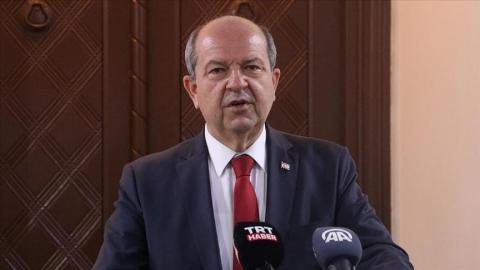 Any solution to the Cyprus problem must come on the basis of two states, the Turkish Cypriot president told the head of the U.N., said the country's spokesperson on Jan. 26.

Saying the conversation was constructive and sincere, Doğruyol said Tatar stressed that the equal status of the two sides on Cyprus is an accepted historical fact.

"Our president stated that in the face of today's realities and the unchanging dominant mentality of the Greek side, a new negotiation ground is needed in Cyprus, and that a just, realistic and sustainable consensus must be established based on the cooperation of two states with an equal sovereignty and equal international status," she said.

The statement said Guterres would "prefer" a 5+UN informal meeting on Cyprus - both sides of Cyprus, the guarantor countries, and the U.N. - to be held in New York but due to the coronavirus pandemic the date and time has yet to be decided.

The island of Cyprus has been divided since 1974, when a Greek Cypriot coup was followed by violence against the island's Turks and Turkey's intervention as a guarantor power.

It has seen an on-and-off peace process in recent years, including a failed 2017 initiative in Switzerland under the auspices of guarantor countries Turkey, Greece, and the U.K. The TRNC was founded in 1983.

How Much Money Do You Need To Join The Top 1%? (infographic)
HealthMin Voiculescu meets Belgian, Austrian, Swiss, French ambassadors on intensifying healthcare co-operation