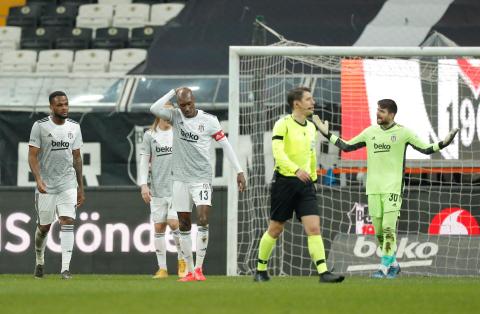 Trabzonspor came from behind to beat Beşiktaş with a 2-1 in an away game on the night of Jan. 31, making the home side lose its top spot in the Turkish Süper Lig standings.

It was Aboubakar's 12th league goal of the season.

Luck was on Trabzonspor's side near the end of the first half, as a left-winger, Anthony Nwakaeme, shot was deflected twice to beat Beşiktaş goalkeeper Ersin Destanoğlu, with the own goal credits going to defender Francisco Montero.

In the 63rd minute, Brazilian defender Vitor Hugo scored with a right-footed strike in the area to bring a 2-1 lead for the visiting side, making a comeback.

Beşiktaş played the last 13 minutes of the game with 10 men after midfielder Dorukhan Toköz was sent off due to a harsh tackle against his opponent.

The home side took risks, preferring an ultra-attacking move to create chances even with a man down, but Trabzonspor defended well to hold on to the victory.

The three major Istanbul clubs continued their domination atop the Süper Lig standings after Week 21 games, with Fenerbahçe, which beat Rizespor by 1-0 on Jan. 30, leading the pack with 45 points.

Beşiktaş trails by one point, while Galatasaray is sitting in the third spot with 42 points following a 2-1 win at Gaziantep on Jan. 29.

Alanyaspor is placed fourth with 37 points, while Trabzonspor climbed up to the fifth spot thanks to the win over Beşiktaş.

Meanwhile, defending champion Başakşehir dropped down to the 15th spot with a shocking 5-1 loss on Jan. 30 at home against Hatayspor.