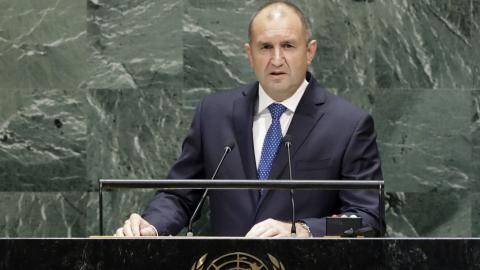 Bulgarian President Rumen Radev announced on Monday that he will run for a second term. "Our candidacy at this time is an honest move for citizens and political figures," he told an hour-long press conference, hailing his own presidency as a voice of reason during the last few years.

In the last presidential elections in 2016, Radev ran as an independent candidate but was supported by Bulgarian Socialist Party and Alternative for Bulgarian Revival, founded by former president and Socialist Party member Georgi Parvanov. Radev won after polling 25.44 per cent of the vote in round one and then 59.37 per cent in the runoff with ruling centre-right GERB candidate Tsetska Tsacheva.

Radev said any possible party endorsements might happen after the next legislative elections, which are due on April 4, but added that he expected to be supported by the Socialists once again. "The bond with the Bulgarian Socialist Party has tightened," he said.

On National Television on Monday, the director and film producer Dimiter Kotzev criticised the President's decision to announce his next campaign on the Day of Remembrance of victims of communist repression. The day marks the 76th anniversary years of mass executions carried out by Bulgaria's new pro-Soviet government. According to Kotzev, "promoting yourself on this day is a sign of a very low style".

In the last five years, Radev has grown into an opposition voice to the ruling coalition of GERB and United Patriots. He has clashed with GERB boss and Prime Minister Boyko Borissov over numerous points, even referring to the government as a "mafia"...