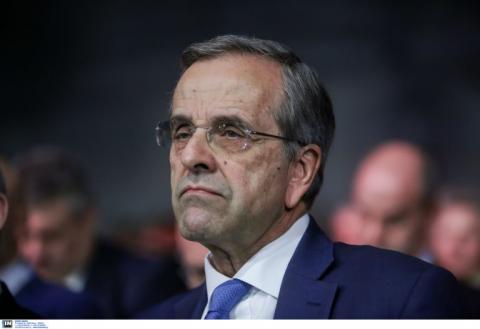 He did so in a flashy manner on the eve of the resumption of exploratory talks with neighbouring Turkey in Istanbul.

He undoubtedly acted with a purpose. He wanted to jump the gun by casting a shadow over the preparatory talks and to thus commit the Mitsotakis government to not proceeding with any kind of dialogue with Turkey.

According to the former PM Greece cannot hold talks with "pirates".

He views Turkey as a power that is laying claims and could trample on Greek sovereignty in the Aegean and the Eastern Mediterranean.

Hence, he believes we have nothing at all to discuss but he forgets that while in power he permitted exploratory talks to be held and he held direct talks with Turkish President Recep Tayyip Erdogan.

Beyond the issue of the Greek-Turkish dialogue, Samaras said he will vote down any draft legislation required for implementing the Greece-Northern Macedonia Prespes naming agreement.

He has thus created the impression that he wants to express the nationalist right-wing in Greece in an absolute manner.

The truth is that Antonis Samaras is not operating in a vacuum. For decades he has had an intransigent stance on national issues and has played the nationalist card, sometimes donning the mantle of the fighter for Macedonia's freedom and at others playing the relentless opponent of the Turks.

At times he advertises his family's traditions and his political descent. He depicts himself as the political offspring of the late conservative leader Evangelos Averof who at times had held talks with the Turks.

At the same time, he depicts himself as a fan of political realism, especially in...