The Show Goes on in Hungary as Theatre, Concerts Move to Digital Realm 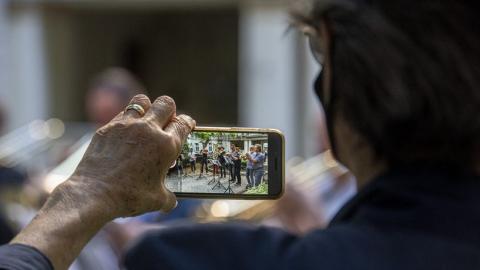 She later told BIRN that she missed the real theatre atmosphere, but it was altogether very cosy to watch the play "from her comfortable armchair, but still being in the first row". Not even masks were required, she laughed.

Few Budapest citizens have any living memories of life without the theatres; the last time stages were empty was during the Siege of Budapest in 1944. More than 70 years later, the closure of the theatres and concert halls has shaken the whole cultural sector and tested the creativity of actors, theatre directors and musicians.

Some have started reciting poems over the phone, while others chose to experiment with live streaming or offering already recorded theatre pieces at a fraction of the usual cost or even free of charge. To some extent, the experiment has paid off.

Today, eSzínház (eTheatre), the main streaming platform, is offering dozens of plays either live or on-demand, keeping theatres active and serving up good, old-fashioned culture to audiences - many of whom have grown tired of Netflix or commercial television during the lockdown.

The founders of eSzínház firmly believe this is not a one-time opportunity to save theatres, but rather a long-term chance to democratise high culture and make it more accessible to a larger number of people, even beyond geographical borders.

The independent Foundation for Hungarian Theatres, which owns eSzínház, was established in 2016 with the main goal of preserving the country's 'cultural memory'. "We offered theatre directors the opportunity to record plays at no cost and save them for the future," Gergely Legradi, the head of eSzínház, told BIRN. "This should have been the task of Hungarian public television, but they have rarely done it since the mid-2000s."