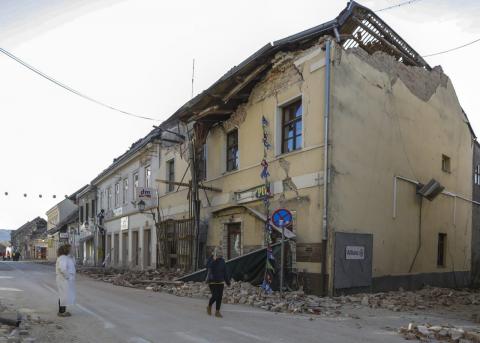 More than a month after a powerful earthquake hit central Croatia, lawmakers on Friday will vote on amendments to the post-earthquake reconstruction law - amid complaints that the basic needs of many people in the affected areas have still not been met.

A series of earthquakes hit central Croatia at the end of last year. The strongest, on December 29, with a magnitude of 6.4 on the Richter scale, demolished many buildings in the towns of Petrinja, Glina, and Sisak and in surrounding villages, and killed seven people.

"It is hard for people to wait over a month for a roof over their heads," Baksic Mitic said, adding that according to her estimates, in the Glina area, 55 appeals for containers or mobile homes have still not been met.

Many homes remain marked with red stickers, which means the building is unusable and requires demolition or total renovation.

Sisak-Moslavina County authorities on Thursday reported that 34,056 damage reports had been filed, of which 23,513 objects had been inspected; 3,136 inspected buildings had been marked as unusable and 5,230 temporarily unusable.

According to her, due to new aftershocks and difficult weather, such as heavy and wet snow, the state the damaged buildings could well worsen. "A lot of houses that had an orange sticker [temporarily unusable] will now certainly have a red one," she noted.

Baksic Mitic also said that aftershocks are causing another type of damage in the area - sinkholes...