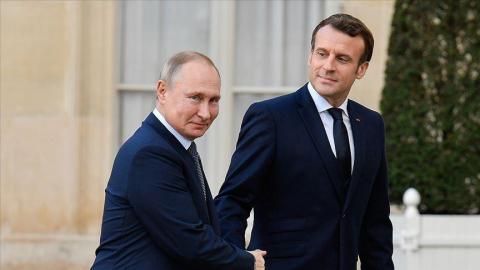 French President Emmanuel Macron on Feb. 4 said it was essential to continue dialogue with Russia despite its "huge mistake" in jailing opposition figure Alexei Navalny.

Macron has long pushed for a working relationship with Russia under President Vladimir Putin and renewed his commitment to the strategy during a question and answer session with the Atlantic Council think tank.

A Russian court this week sent Navalny to prison for over two and a half years, compounding Western anger after his poisoning last year that Europe says was through the Soviet-era nerve agent Novichok.

"I think this is a huge mistake, even for Russian stability today," Macron said of the Moscow court's ruling, which critics say aims to silence Navalny.

But he added that he advocated ongoing dialogue because Russia was "part of Europe" and it was "impossible" to have peace and stability in Europe without being able to negotiate with Russia.

Macron also raised eyebrows, particularly in Germany, by saying Europe needs "strategic autonomy" enabling it to handle its defense matters without relying on the U.S.

"Our duty definitely is not to put ourselves in a situation to depend on U.S. decisions," said Macron, adding a mindset needed to be changed that "built the concept of the absence of European defense".