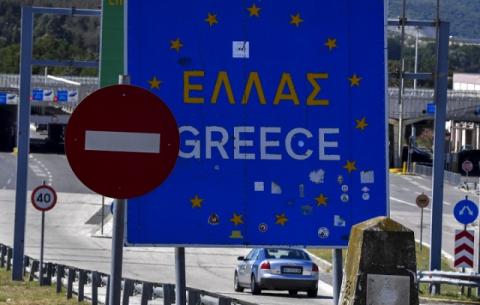 The Greek government extended the validity of its decision to close land borders with North Macedonia, Albania and Turkey, as well as the ban on third-country nationals entering Greece for another two weeks, until 22 February 2021, BGNES reported.

The new decision to "introduce measures to temporarily restrict the country's land, air and sea communications and to ban third-country nationals other than EU and Schengen countries" has already been published in Greece's official gazette and entered into force this morning.

The first article of the Decision concerns Greece's land borders, i.e. the temporary restriction of all land (road and rail) travel to and from Greece, as well as a ban on entry of persons on Greek territory, unless they meet specific requirements.

For tourists and foreign nationals to whom the ban does not apply, entry is allowed only through Bulgaria, i.e. through the Promahona border checkpoint (Kulata) and only with a negative PCR test for Covid-19, carried out 72 hours before arrival, but also with a negative result of a rapid test carried made at the entrance to Greece.

At other open border crossing points, entry into Greece is permitted only for certain categories, as well as with confirmation of a previous negative PCR test and a negative result of a rapid test at the border checkpoint carried out by the Greek authorities. These BCPs are open from 07:00 am to 11:00 pm.

The ban on entry into the country does not apply to Greek citizens, persons with a residence permit and persons living in Greece, for the entry of persons with professional or medical reasons for which they have the necessary documents, for trucks, as well as for the transit of ambulances entering Greece from Kosovo via North Macedonia to...