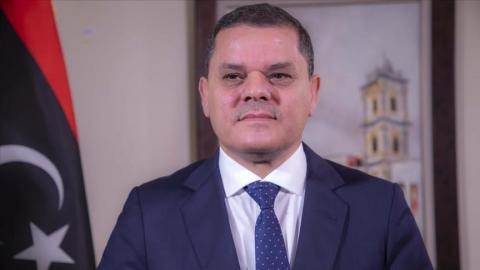 Libya's new Prime Minister Abdul Hamid Dbeibeh described Turkey as a "friend and ally," saying his government will work to achieve peace in war-torn Libya.
Dbeibeh's remarks came in an exclusive interview with Anadolu Agency, his first interview ever after being elected to lead an interim government.
On Friday, Libya's rival political groups agreed to form an interim unity government after five days of talks in Switzerland. Mohammad Younes Menfi was elected to head the Presidency Council of an interim government and Dbeibeh as its prime minister. Mossa Al-Koni and Abdullah Hussein Al-Lafi were also voted on the three-strong Presidency Council.
"My government will work to establish peace in Libya and solve the major problems facing the country," Dbeibeh told Anadolu Agency.
He said the election of an interim authority in Libya by the Political Dialogue Forum "would serve the best of Libya and its people."

"The 74-member forum was made up of members representing all regions in Libya. It represents all geographical regions, tribes, and all segments of the Libyan people," he said.

Government formation
Dbeibeh said the new Libyan government would be formed after three weeks before being put for a vote of confidence by the Libyan Parliament.

"There will be a fair representation of all segments of the Libyan people and all regions, but the focus will be on [achieving] the technocrat goals," he said.
Asked about the possibility of reappointing former government members in his interim government, Dbeibeh said, "This is possible. The government will be technocrat and whoever has proved his efficiency will be among the government team".

Reconciliation
In the interview with Anadolu...