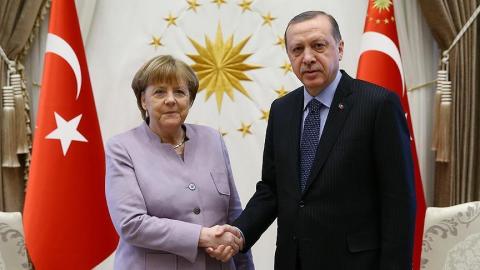 The two leaders also discussed issues that would improve cooperation between the two countries, according to a statement by Turkey's Communications Directorate.

In the video talk, stressing Turkey's determination to boost relations with the EU, Erdoğan said Turkey wishes to intensify contacts and have technical talks with the bloc in the period ahead of an EU summit planned to be held in March.

Highlighting that the EU's fair and constructive approach to Turkey would benefit both sides, Erdoğan reiterated his call for updating a refugee deal inked on March 18, 2016.

The 2016 agreement aimed to discourage irregular migration through the Aegean Sea by taking stricter measures against human traffickers and improve the conditions of nearly 4 million Syrian refugees in Turkey.

The deal also allowed for the acceleration of Turkey's EU membership bid and visa-free travel for Turkish nationals within the Schengen area.

Erdogan also reiterated his expectation on a Turkey-EU summit to be held before Portugal's presidency of the EU Council ends.