Albania Urged to Save Wild River by Proclaiming National Park 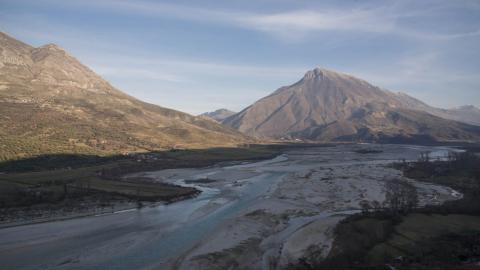 Twenty environmental organisations have called on the Albanian government to declare the river Vjosa - one of the last "wild" rivers in Europe - a national park. The request was sent on Wednesday to the Minister of Environment and Tourism, Blendi Klosi,

The Vjosa river is one of the last large free-flowing rivers in Europe, but in recent years it has been threatened by projects to build dams. Scientists and environmental experts have lobbied against these attempts, emphasizing its unique value.

In October 2019, the river drew the attention of the famous US actor and environmentalist Leonardo Di Caprio who condemned plans to build eight dams along the main river. "This is one of Europe's last wild rivers. But for how long?⁠" he asked.

"Albania's government has set in motion plans to dam the Vjosa to generate much-needed electricity for one of Europe's poorest countries, with the intent to build eight dams along the main river," he added.

Olsi Nika, head of Eco Albania, a green organisation, told BIRN that the latest request was the product of years-long efforts to save the river from interference.

"The proposal to declare the Vjosa a national park … is the formalization of the position we have held for more than six to seven years, and has to do with the reconfirmation of the attitude and idea not only of Eco Albania but of a very large group of environmental organisations, experts, artists and local communities," Nika aid.

He added that placing the Vjosa river in the highest category of protected areas would help preserve and conserve it.

The cause has attracted international support from such organisations as Riverwatch, EuroNatur, WF Adria, Westland International Europe, International Rivers and The Nature...