Serbia’s President Will Struggle to Get Patriarch He Can Control 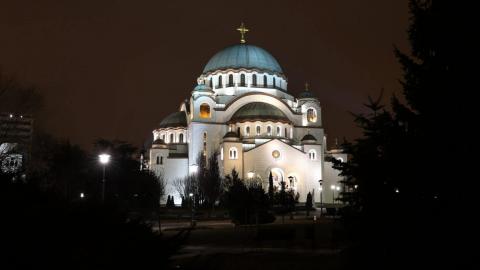 In fact, German was not elected under the present-day lottery system. The Church introduced the "apostolic vote" only in 1990, precisely to stop the state from meddling in the process.

In 2010, during the election of the late Patriarch Irinej, three names made it to the Gospels - his own name, Irinej of Backa's and that of the recently deceased Amfilohije, Metropolitan of Montenegro and the Littoral. The Holy Spirit elected the oldest and least divisive of the candidates.

Notwithstanding his ability to exert pressure on the bishops, President Aleksandar Vucic will not decide who will be Serbia's next Patriarch. Because of the system of random selection, the best he can hope for is that two of "his" candidates make it to the last round, increasing the chances of one of them being elected.

Several candidates are likely to make it to the Gospels. One is the that of powerful Bishop Irinej (Bulovic), nicknamed "protector of the unworthy" because of his past shielding of several senior clerics involved in corruption and sexual abuse scandals.

Because of his role as gatekeeper of the secrets of the Church, he controls an impressive voting machine in the Assembly of Bishops. Irinej is very close to the Russian Orthodox Church and thus presents an obstacle to the ecumenical drive of the Serbian Church. Irinej is not among those bishops who are critical of the Serbian regime, yet, because of his power, his election would be risky for President Vucic, who would have a hard time controlling him.

Two bishops competing for the graces of the Serbian regime, and likely to get to the second ballot, are Porfirije, Metropolitan of Zagreb and...