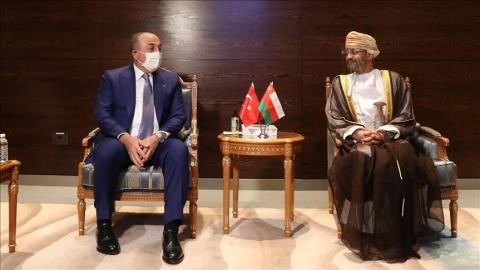 "We are ready to work closely with Oman and all other Gulf countries on issues regarding our region," Çavuşoğlu said at a joint news conference with his Omani counterpart, Sayyid Badr bin Hamad bin Hamood al-Busaidi.

The two countries will further improve political, economic and commercial relations despite the COVID-19 pandemic, Çavuşoğlu said, noting that he welcomed Oman's "independent and impartial foreign policy" and that the Muscat administration was the voice of reason in the region.

"Turkey is the strategic partner of the [Gulf Cooperation Council] GCC and we welcome the normalizations between the GCC countries and some other countries in the region. So, Turkey is supporting the unity, prosperity and security of the Gulf region," he added.

The two ministers discussed the latest developments in the region, including Syria, Libya, and Yemen, as well as bilateral ties, Çavuşoğlu stressed he is happy to see that Turkey and Oman have the same position on all these countries and are harbingers of peace and stability.

Al-Busaidi for his part said, "During this visit, we had a positive and useful session on our good and special bilateral relations between the two countries. We discussed ways to further develop these relationships, especially in the fields of economy, trade, tourism and culture."

He said that they agreed to a great extent in terms of their perspective on regional and international common issues and to support the joint effort in resolving such issues.

Çavuşoğlu is on a three-day Gulf tour. On Feb....

India Has Donated over 5.5 million Doses of Vaccines to Neighbouring Countries