In Athens, a regional alliance is taking shape 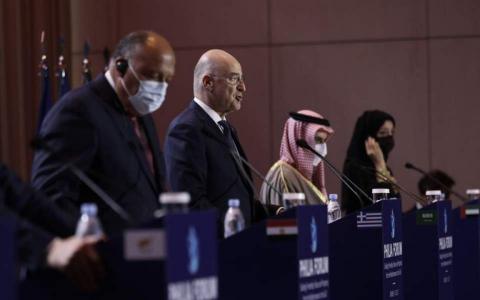 Foreign ministers and senior officials from several Persian Gulf countries are meeting in Athens on Thursday, as Greece seeks to expand alliances to counter tension with regional rival Turkey.

NATO members Greece and Turkey remain locked in a dispute over boundaries and resource rights in the eastern Mediterranean that led to a dangerous military buildup in the region for months last year.

The visiting officials from Saudi Arabia, Bahrain, and the United Arab Emirates were meeting in Athens with the foreign ministers of Greece, Cyprus and Egypt, which already hold regular contacts, and they were joined by video link by French Foreign Minister Jean-Yves Le Drian.

The participating countries have broadly sided with Greece in the eastern Mediterranean dispute.