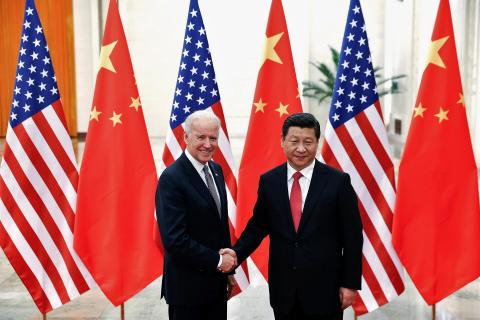 Joe Biden had his first call as president with Xi Jinping, pressing the Chinese leader about trade and Beijing's crackdown on democracy activists in Hong Kong as well as other human rights concerns.

The two leaders spoke on Feb. 10 just hours after Biden announced plans for a Pentagon task force to review U.S. national security strategy in China and after the new U.S. president announced he was levying sanctions against Myanmar's military regime following this month's coup in the southeast Asian country.

"I told him I will work with China when it benefits the American people," Biden posted on Twitter after the call.
China's state broadcaster CCTV struck a mostly positive tone about the conversation, saying Xi acknowledged the two sides had their differences, and those differences should be managed, but urged overall cooperation.

CCTV said Xi pushed back against Biden's concerns on Taiwan, Hong Kong and Xinjiang, saying the issues are China's internal affairs and concern Chinese sovereignty. He warned, "The U.S. should respect China's core interests and act with caution."

Biden, who had dealt with the Chinese leader when he served as Barack Obama's vice president, used his first three weeks in the White House to make several calls with other leaders in the Indo-Pacific region. He has tried to send the message that he would take a radically different approach to China than former President Donald Trump, who placed trade and economic issues above all else in the U.S...

"Foreigners came to our country to kill the president"

Chinese Military Points at US in Anger