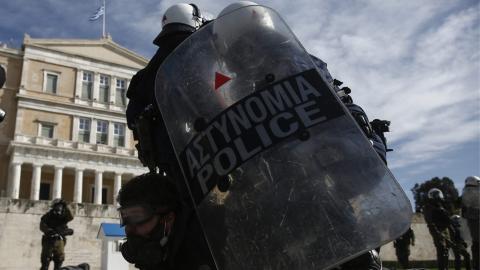 Police in Greece have been criticised after videos circulated on social media of officers violently pushing and shoving photojournalists covering a protest against a new bill for universities on Wednesday.

The photojournalists' union said riot police beat up a member of the union who had been reporting on the protests.

It added that one day before, police tripped up photojournalists covering another protest,­ this time in support of Dimitris Koufontinas - another union member, jailed on November 17 last year - now on hunger strike demanding transfer to another prison.

The new bill among other things allows police to maintain a presence on university campuses. A law withdrawn in 2019 long prohibited police from entering university grounds in Greece, in memory of those killed in 1973 when the military regime violently crushed an uprising at the Athens Polytechnic.

Niki Kerameus, the Education Minister, says the problem of security on Greek campuses has become acute and current lawlessness is forcing Greek students to study abroad.

Outside the Greek parliament, during the debate on the bill, a group of some 200 people, drawn from the main protest of some 5,000 protesters, clashed with riot police, who used tear gas to disperse them. Police took 52 individuals into custody.

Konstantinos Zilos, a photojournalist covering that protest, complained to BIRN of the police's "dangerous repression" of citizens and media professionals.

Besides the incident involving the beaten-up photojournalist, he added, "the police a number of times have prevented our work, cutting our access without reason and blocking our cameras with their hands or bodies".

Alexandra Tanka, a reporter for in.gr, told BIRN that a 21-year-old...

Staikouras for exit of Greece from Enhanced Supervision: “A great national goal has been achieved”