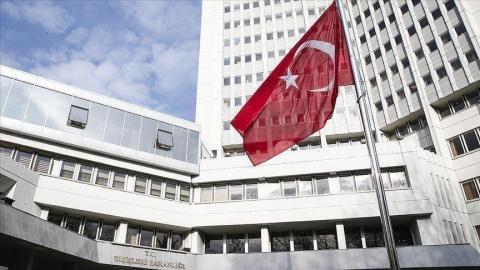 Ankara on Feb. 11 criticized the Greek foreign minister's "unfounded accusations and slander" against Turkey at a meeting of the "Friendship Forum" in Greece's capital Athens.

"At a press conference at the end of the forum, which claims that it does not target any country, Nikos Dendias's unfounded accusations and slander against Turkey show that this initiative is not based on friendship but in fact on hostility towards Turkey," Hami Aksoy, the Turkish Foreign Ministry spokesman, said in a statement in response to a question.

The Philia Forum was held in Athens on Thursday with the participation of foreign ministers of Greece, Egypt, France, Saudi Arabia, the UAE, Bahrain, and the Greek Cypriot administration.

"The Greek/Greek Cypriot duo threaten peace and stability in the region by blocking the positive agenda that the EU is trying to create with candidate country Turkey and by doing politics while depending on others," Aksoy said.

"We call on the duo to act with good sense, and other countries in the forum not to become victim of others' games," he said.

It is not possible for any forum in the region to establish a successful cooperation and friendship mechanism without including Turkey and Turkish Cypriots, he added.