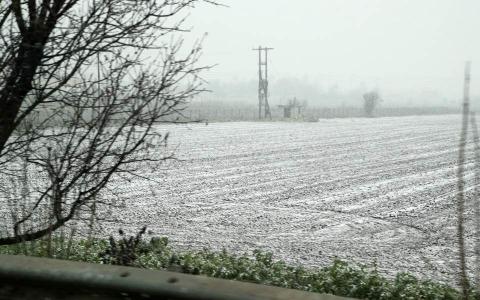 Northern regions of Greece started seeing snow on Saturday, as a low pressure system, named Medea by the Athens Astronomical Observatory, started sweeping through the country.

The cities of Larisa, Florina, Kozani, Kastoria, Ptolemaida, Veria, Kavala, Katerini and the region of Halkidiki reported snowfalls through the day, with temperatures plunging to -6 in Florina and -5 in Ptolemaida and Amyntaio.

In Florina, municipal authorities banned trucks weighing over 3.5 tonnes from the Larissa-Kozani and the Larissa - Elassona - Kozani highways.

Thessaloniki has so far seen some light snowfall in the city center, while earlier it snowed on the mountains of the prefecture and specifically in Chortiatis and Oreokastro. So far, no problems have been reported.

Northern Greece will experience low temperatures, with highs in the region of Western Macedonia below...