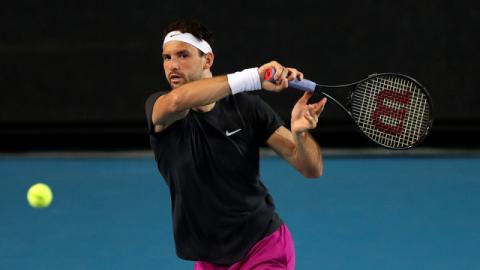 Grigor Dimitrov caused a big upset on Sunday by sweeping past last year's finalist Dominic Thiem for a place in his fourth Australian Open quarter-final.

Dimitrov, the No. 18 seed, played with great athleticism beat third seed Thiem, who was noticeably low on energy, 6-4, 6-4, 6-0 in just over two hours on Rod Laver Arena.

"I thought I kept the ball rolling and was trying to focus on my game plan," said Dimitrov. "I stayed focused and composed throughout the match. I am very happy to be in the quarter-finals. I thought I had great preparation coming into the tournament and wanted to pace myself, working hard off the court. Dominic is an extraordinary player and I enjoy playing against him."

The Bulgarian will next play World No. 114 and Russian qualifier Aslan Karatsev, who recovered from two-sets-to-love down to beat Felix Auger-Aliassime earlier on Sunday. Dimitrov will be contesting his sixth Grand Slam championship quarter-final.

Thiem had six game points for a 4-1 lead in the first set, but let Dimitrov back in. As Thiem's unforced error count increased, Dimitrov won five straight games. Thiem struck a backhand return long off a deep second serve on Dimitrov's first set point to end the 57-minute set.

When Thiem put together consecutive forehands to break for a 3-1 lead in the second set, the physical fatigue caused by coming back from two-sets-to-love down against Nick Kyrgios on Friday seemed to evaporate. But Dimitrov rallied immediately, breaking in the fifth and ninth games of the second set, prior to closing out to love at 5-4.

The third set was one-way traffic, once Thiem started to serve and volley to lose the first game. The Austrian won just five points in the 21-minute set, which ended with Dimitrov hitting...