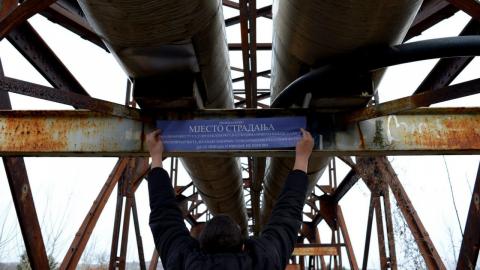 Activists from the Centre for Non-Violent Action said they installed temporary commemorative plaques this month in the Zenica, Doboj and Zepce areas of Bosnia as part of an ongoing campaign to push local authorities to create permanent memorials to war victims.

They installed plaques at a former grain storage unit and at a school gym in Zepce, as well as at school buildings in the nearby villages of Ljubatovici and Perkovici.

The Centre for Non-Violent Action said that from June 1993 to March 1994, the Bosnian Croat wartime force, the Croatian Defence Council, detained several hundred Bosniaks in these buildings. The detainees were kept in overcrowded and inhumane conditions, beaten and abused.

The activists also marked the Penal and Correctional Facility in the town of Zenica, where Croat and Serb civilians and soldiers were held in inhumane conditions from 1992 to 1995 and subjected to abuse and assault.

They installed another plaque at the Iron Bridge in the town of Doboj, where 11 civilian detainees were killed by Bosnian Serb forces in 1992.

Grain storage unit in Zepce where prisoners were detained. Photo: Marking the Unmarked Sites of Suffering.

The plaques are part of a campaign called 'Marking the Unmarked Sites of Suffering', which has seen temporary memorial signs installed at 108 locations in Bosnia and Herzegovina over the past five years to express solidarity with war victims and argue the case for permanent memorials.

"Unfortunately, in many cases, these communities are now the minority, so they are not allowed to mark the places of detention, torture or murders," said one of the activists, Tamara Zrnovic.