Families of Missing from Bosnian War Plead for Action 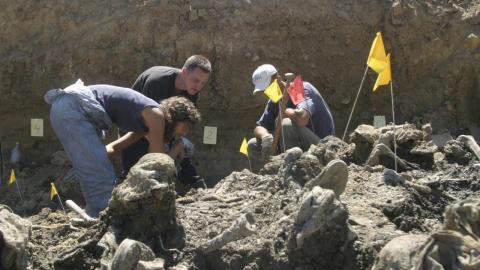 Marko Grabovac, president of the Association for the Search for Missing Persons in Bosanski Brod Municipality, told BIRN that none of the 80 people who disappeared in the Brod area in northern Bosnia during the war and are still missing have been found in the past two years.

Grabovac, who is also a member of the advisory board of the Bosnian Missing Persons Institute, said that more should be done to find the bodies of those who disappeared, many of whom were elderly when they were seized from their homes during the 1992-95 war.

"Some have been found in mass graves. Very few elderly persons were exchanged [released in prisoner exchanges] or remained alive," he said.

He noted that the majority of the 88 war victims who were found in the largest mass grave in the Brod area, which was known as Bosanski Brod before the war, were elderly people.

Grabovac is still searching for the body of his mother, who was 82 when she went missing.

"My mother disappeared near her house in the village of Lijesce in May 1992. Several old ladies were captured and taken away in an unknown direction," he said.

Another resident of Brod, Jelica Kusljic, told BIRN that she has been searching for the remains of her mother, Draginja Sukurma, for the past 29 years.

"My mother was killed by a grenade in her yard in the village of Lijesce on May 10, 1992. She has been missing with no trace ever since. Nobody knows anything," Kusljic said.

"I was in Serbia with my children [at the time]. We have never found out where she ended up. There is absolutely no trace of her anymore," she added.

She said she was dissatisfied with official efforts to find the remaining missing persons from the war.

"Nobody tries very hard to find those...