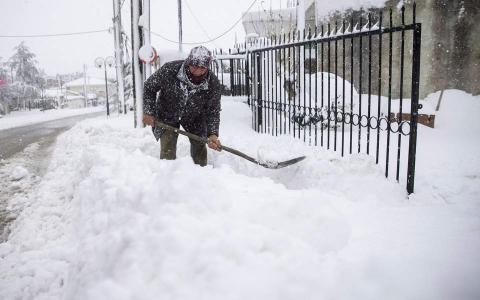 The heaviest snowfall to hit Greece in 12 years triggered power cuts, disrupted transport and trapped people in their homes on Monday.

A cold front swept across the country from Saturday, driving temperatures down to -20 degrees Celsius (-4 degrees Fahrenheit) in northern Greece and causing rare snowfall in Athens after a period of unseasonably warm weather.

The head of the National Meteorological Service, Theodoros Kolydas, said the snowfall was the "fiercest, in terms of intensity and volume, in 12 years".

In the town of Kapandriti, a few miles north of the capital, snow blanketed roads and vehicles.

"I haven't (seen) this in 10, 12 years. It's a lot of snow," resident Panagiotis Oikonomou said as he cleared the entrance of his home with a shovel.

Power cuts were reported across mainland Greece and on islands off its eastern coast that were...

Family of boy who died of heart attack donate organs

PM: ‘The year 2022 was one full of challenges but also steps of progress’

Traffic accident near Tripoli results in one death

Ancient art as a key to understanding mental health

Digi.travel Cyprus conference to be held on Jan. 11