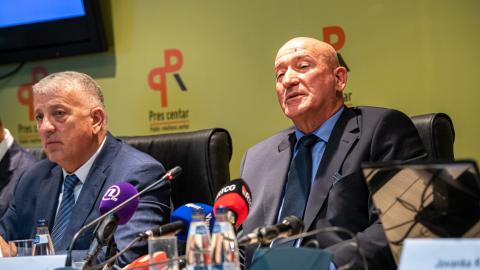 At a press conference, Savovic said Katnic had stopped an investigation into former transport minister Ivan Brajovic, who had been accused of corruption in connection with the Bar-Boljare highway project.

"I asked Katnic about the charges against Brajovic. He told me: 'We won't do an investigation now into unscrupulous work …' I told him the case should be submitted to the Basic State Prosecutor's Office. He asked us to carry out expertise, which has not happened yet," Savovic said.

In March 2019, the prominent NGO MANS filed criminal charges against Brajovic, accusing him of losing the state budget about 134 million euros because he failed to put the Smokovac crossroad into the project concluded with the highway's investor, the China Road and Bridge Corporation, CRBC.

On February 3, he submitted a complaint to the Supreme Prosecutors Office, calling on them to investigate the Special Prosecutor's work in the "coup plot" trial, and saying he had discovered illegal acts there as well.

Sixty-four-old Katnic was appointed Special State Prosecutors for his first mandate in 2015, and reelected in June 2020.

He is highly unpopular with the former opposition for his role in...