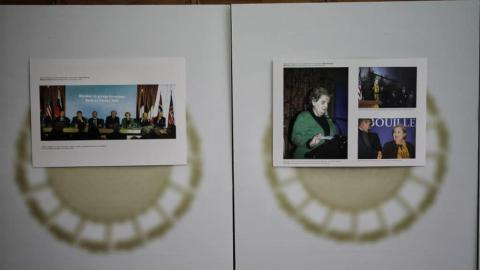 Kosovo-born photographer Asllan Krasniqi's images of the 1999 Rambouillet peace conference went on display at the National Library in Pristina on Tuesday at an exhibition staged to coincide with the 13th anniversary of Kosovo's declaration of independence.

Fazli Gajraku, the director of the National Library, said that Krasniqi's photos give an insight into "one of most important events in the determination of Kosovo's [political] destiny".

"Asllan Krasniqi has documented a painful and glorious piece of history," Gajraku said during the opening ceremony.

The peace conference at the Chateau de Rambouillet opened on February 6, 1999, as the US, EU and Russia tried to bring the Kosovo war to an end.

But their attempts to mediate an agreement between then Yugoslav leader Slobodan Milosevic and representatives of the Kosovo Albanians were unsuccessful, and the failure of diplomatic efforts led to NATO launching a campaign of air strikes against Yugoslavia, which caused Milosevic to withdraw his forces from Kosovo in June 1999.

Krasniqi, who has lived in Belgium since 1967, recalled how he had to make a daily trip from Brussels to Rambouillet near Paris to capture images of the peace talks.

"It was difficult for me to travel from Brussels to Paris and take care of my daily work but I had to keep on doing it," he said at the launch of the exhibition.

"I have jealously preserved these photos for a place like this and for an anniversary like this," he added.