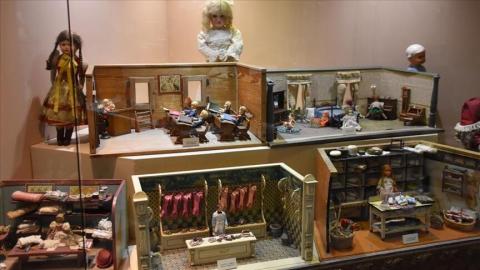 The Game and Toy Museum in the southeastern province of Gaziantep, which hosts thousands of local and foreign tourists throughout the year with its historical buildings and museums, takes its visitors on an intercultural journey with toys from many countries.

With the effort of Gaziantep Metropolitan Municipality, the museum was established eight years ago by restoring a three-story historical building in the Şahinbey district's Bey neighborhood, and today the museum has become a center of attraction due to its interesting collection of toys.

Rooms on each floor of the museum are home to thousands of toys from the countries such as Turkey, Iran, Egypt, Italy, France and the United States. Some children's games are also being presented in the museum.

The museum offers its visitors a chance to get to know different cultures with the colorful world of thousands of games and toys and has been a great tourist attraction worldwide.

Speaking with the state-run Anadolu Agency, the archaeologist and drama leader of the museum, Tuğba Ateş, said the museum was established in one of the important historical buildings of the city.

Stating that there are different games and toys in the museum, Ateş said, "There is an artificial cave in the garden of the museum. With the flags of 24 different countries in the cave, their local clothes and features, it takes visitors on a small world tour."

"The cave also serves as an exhibition space. There are Turkish toys in one of the rooms. There are also a lot of German toys throughout the museum. This is because Germany used to be the world leader in toy production," she added.

Ateş also pointed out that the number of visitors decreased due to the COVID-19 pandemic.