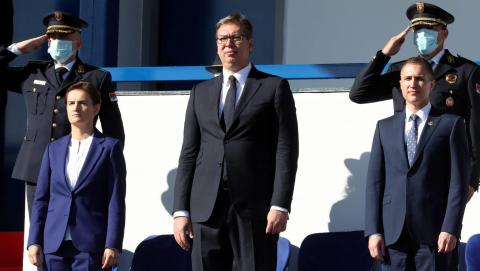 According to the Hungarian sociologist Balint Magyar, in a 'mafia state' "The state itself, at the top, works as a criminal organisation."

The term was applied to Montenegro in the 1990s, when state-sanctioned cigarette smuggling provided a financial lifeline during the wars and sanctions of Yugoslavia's collapse, and later to Kosovo, when Hashim Thaci, a former president and prime minister now charged in The Hague with war crimes, was accused by a Council of Europe investigator of exerting "violent control" over the trade in heroin, an accusation he denied.

If, as Venezuelan journalist Moises Naim argued in Foreign Affairs in 2012, senior government officials in a mafia state "actually become integral players in, if not the leaders of, criminal enterprises", then experts say the revelations of the past few years show Serbia too now fits the bill.

The evidence is damning - from the involvement of security service officials in the industrial-scale production of marijuana and the documented ties between Serbia's ruling party and a crime gang accused of murder and drug trafficking, to the state protection enjoyed by a notorious businessman accused of ordering the murder of a prominent politician.

"All those elements suggest that Serbia is indeed a mafia state, where the demarcation line between the state and organised crime is not at all clear," said Bojan Elek, a researcher at the Belgrade Centre for Security Policy, a think-tank.

Private security guards, some close to Serbian crime gang Janjicari, were hired for the inauguration of Serbian President Aleksandar Vucic in May 2017 and caught on camera manhandling journalists. Photo: Aleksandar Baclija

Serbia has blurred that line before.