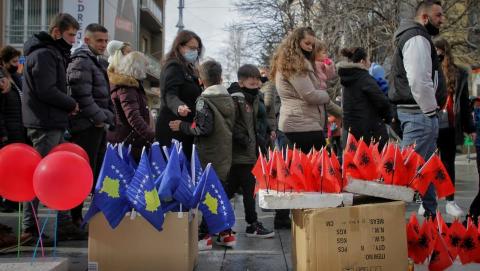 Marking the 13th anniversary of Kosovo's proclamation of independence, at a ceremony organised at the compound of the Kosovo Security Force KSF, the country's Acting President, Vjosa Osmani, recalled the past struggle for independence and the future goal of "integration into the community of European nations".

"The blue flags that have decorated our cities make us proud of our state. The path we followed before reaching the independence was not easy and short," Osmani said, referencing the national flag's background colour.

Caretaker Prime Minister Avdullah Hoti for his part recalled Kosovo's independence as "the biggest project [of the Albanian nation] since the declaration of Albania's independence" - in 1912.

"Days like this bring to our attention the highest values of patriotism. On days like this we draw strength and commit ourselves to the debt we owe our children," Hoti added.

An activist paints handprints on the 'NEWBORN' monument during preparations to mark the 13th anniversary of Kosovo's independence in Pristina, Kosovo, February 16, 2021. Photo: EPA-EFE/VALDRIN XHEMAJ

While Kosovo had reached its "teenage" years as a state, they continued, many challenges lie ahead.

The mainly ethnic Albanian former province of Serbia declared its independence on February 17, 2008.

However, its statehood remains contested by Serbia and its allies. Two of the five members of the United Nations Security Council, China and Russia, and many other countries, have not recognised Kosovo. Five European Union member states - Greece, Cyprus, Spain, Romania and Slovakia - have also withheld recognition. The country has yet to join the UN.

According to the Kosovo Foreign Ministry website, 117 UN member states have...