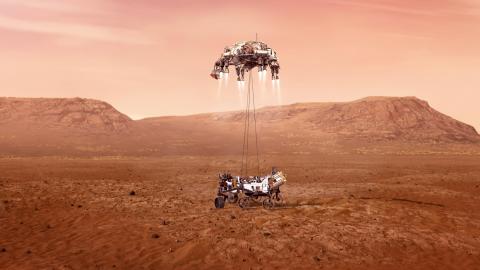 After seven months of travel, NASA's rover Perseverance is preparing to land on Mars on Thursday, which will be the start of a years-long search for evidence of ancient microbiological life on the Red Planet.

The Mars 2020 mission, launched in late July from Florida, includes the largest vehicle ever sent there.

The landing event will be monitored especially in the small Bosnian municipality of Jezero where the local authorities are organising a live broadcast of the landing on a video beam.

The reason for the huge interest of the poorly developed Bosnian municipality of barely over 1,100 inhabitants in the American space program is that the rover is landing in a crater in Mars named after it.

The International Astronomical Union, IAU, in 2007 gave the name Jezero Crater to a 28-mile-wide (45-km-wide) crater on the western edge of Isidis Planitia, a giant basin just north of the Martian equator.

The name was chosen from 80 suggestions, and the reason given is that in many Slavic languages Jezero describes a natural depression or a depression filled with water.

On September 23, 2019, the US Ambassador to Bosnia, Eric Nelson, handed over a letter from the US spacew agency NASA to the mayor of Jezero, Snezana Ruzicic, confirming that the crater was being named after her municipality.

"It takes an international team of experts to create and support a mission with the complexity and ambition of Mars 2020. I am proud that we can now include the citizens of Jezero, Bosnia and Herzegovina, as honorary members of the 2020 team. Together, we will...